Core 1: What is Same Side Selling?

Learn how Same Side Selling is different to the traditional systems of sales and marketing. We assume it’s about convincing our prospect, but let’s look at how we can show up as someone to solve a problem, not sell something.

In this lesson you will discover:

The Worksheet for this Lesson 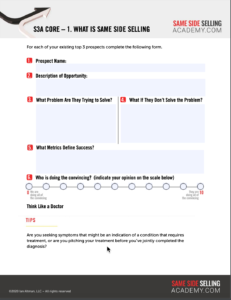 Why Giving Your Client Too Many Choices Is a Bad Idea

Giving your client too many choices can sometimes create paralysis and stall the sales process.

This likely means that you haven’t yet figured out exactly what the client needs and what they are trying to achieve. So when that happens, you’ve likely done some premature presenting of possible solutions for your client. Here’s how to overcome this situation and get things back on track with your client.

Why ‘About Us’ Explanations Repel Potential Clients

Leading with an “About Us” explanation in a sales pitch or presentation to a client puts you at a major disadvantage. Nobody cares about your background if they don't first, see how whatever you do might apply to their own situation. In this video, discover how you overcome one of the biggest mistakes businesses make when meeting with potential customers.

What is Same Side Selling? How's it different from traditional approaches to business growth and sales and marketing?

In most traditional systems, we are taught that as the seller, it's our job to persuade or convince the other person that they should buy our stuff. In fact, the assumption is that they have a need for what we sell. They just don't know it yet. And the problem with that is how we show up. See, when you're talking to a potential client, you can only show up in one of two ways. You can either show up as somebody who's there to sell something or you can show up as someone who is there to solve something. And in Same Side Selling, we want to make sure that we always show up as someone who's there to solve something, not sell something. And what that means is that we have to change our mindset a little bit. Instead of the mindset that is well really made popular, made famous by the Glen Gary Glen Ross, scene of ABC, Always Be Closing. Instead, we want to think of FIT, or F.I.T, Finding Impact Together.

See instead of us convincing them, we need to be convinced.

Now, what exactly do we need to be convinced of? Well, first we need to think about is what's the problem that this client is facing that we're good at solving? And part of that means that in Same Side Selling, instead of leading with our products and services, we lead with the problems that we solve. So if we meet somebody new, we don't say, "here are the products and services we offer." Instead, we say, "our clients come to us when they're facing these sorts of challenges. Does one of those ring a bell for you?" Because first we want to find out did they have a problem that we're pretty good at solving?

Now here's where the tricky part comes in. At that point, "the convincing" is not our job. The convincing is for us to ask good questions so that the client convinces us.

Now, what exactly are we looking for them to convince us of?

So once someone says, yeah, I've got that same sort of problem, we don't want to jump the gun.

We want to say, okay, well is that problem worth solving? And the way we get to that is we ask a simple question, which is, "So what happens if you don't solve that?" What you have to do is fight everything you've probably been taught in the past and instead of jumping to your solution, be skeptical and say, "Well, I see you have this issue. Is that really worth solving? Is it worth going through the headache of trying to fix that problem?"

How are we going to figure out whether or not we can deliver it unless we understand what the results are that they actually expect?

Now they may, they might share something that is not actually a legitimate or realistic expectation. Let's say you were selling financial services, they might say, "Well, success for us would be a 20% return."  You can't guarantee a 20% return. No one can. It would be an unrealistic expectation, in which case you might just say, well, "So what kind of return are you getting today?" They might reply. "We're getting 5%."

"Okay, and it sounds like if you got 7% that wouldn't be worth it, right? "Oh no. That would probably be worth it. And now what's happening is they are convincing you that this is worth pursuing. So this first step in Same Side Selling is mindset.

It's about understanding that you're not in the business of convincing or persuading others. Instead, you're on a mission to find the people who have a problem that you're good at solving and get them to convince you that that problem is worth solving for them. And then to understand what kind of results they're looking for so you can evaluate whether or not you can help. See if I focus on what problem are you trying to solve, is it important enough to solve and can I help you? Then hopefully you can see that by doing it that way, we show up as someone who is there to solve, not sell, and it's way better to be on the side of solving vs. selling.

Ready To Get Started?

Have you ever had a potential client come to you and say,...
Listen to this episode

If you invest in a program and don’t see results, you are...
Listen to this episode

How to Follow Up When A Deal Is Delayed

Have you ever forecasted a deal to happen and the clients seem...
Listen to this episode

There is a difference between the top sales performers and the people...
Listen to this episode

Login
Accessing this course requires a login. Please enter your credentials below!
Lost Your Password?